Matthew Montfort began his studies of Recordings Arts at the University of Colorado at Denver in 1976. In 1977 he was in the first class to utilize their state of the art recording facility at their newly opened Aurora campus. This innovative program was among the first to offer hands-on experience in all aspects of record production and engineering.

Montfort was one of the first wave of musicians to take advantage of computer recording technology, and so has decades of experience with digital workstation technology including Cubase and Pro Tools. In addition to record production, he is also very skilled at engineering, editing, mixing, audio restoration, and mastering. For modal music, he developed a process he calls Tuned Harmonic Mastering to tune the recording adjustments exactly to the tonalities of the music. He is an expert at audio restoration, with years of experience fixing problems in live recordings and restoring archival recordings. Among his favorite software tools for dealing with tape hiss, broadband noise, guitar squeaks, clicks, pops, unwanted ambient noise, and other audio restoration tasks is iZotope RX.

Montfort has been involved in the production of dozens of full length record releases. He has very high standards, yet knows how to capture a musician's best performance quickly. As a record producer, mastering engineer, and audio restoration expert, he accepts a limited number of projects at his studio in San Rafael, California, that he feels could benefit the most from his unique skills. If you think you have a project that could benefit from his critical ear, call 415-459-1892 or email info@ancient-future.com.

Unique, beautiful musical landscapes...from rare ancient instruments from around the world to the latest in digital music technology...

Based in the San Francisco Bay Area, Ancient Future Music is an offshoot of the popular recording ensemble, Ancient Future. Led by Matthew Montfort, Ancient Future has been involved in creating new, exciting and beautiful music by combining musical forms from around the world since 1978. The music is extremely accessible, melodic, rhythmic, and the highest quality. Masters of African, Chinese, Balinese, European, Indian, Japanese, Middle-Eastern, South American, and contemporary Western music are part of the production team. With this musical palette, there are unlimited possibilities to create the perfect score for your production, be it a film, video, commercial, video game, exhibit, or web site.

Ancient Future Music works hard to fit your budget. Call 415-459-1892 or email info@ancient-future.com for a quote.

"Uplifting, joyous and life-affirming. Uses a remarkable range of instruments to create breathtakingly beautiful tunes. At once complex and uncluttered, serene and yet energizing." – THE GAZETTE TIMES 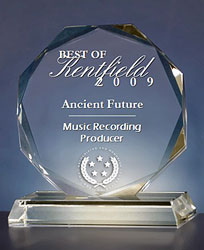 A New World of Music
for Film, Video, and Multimedia